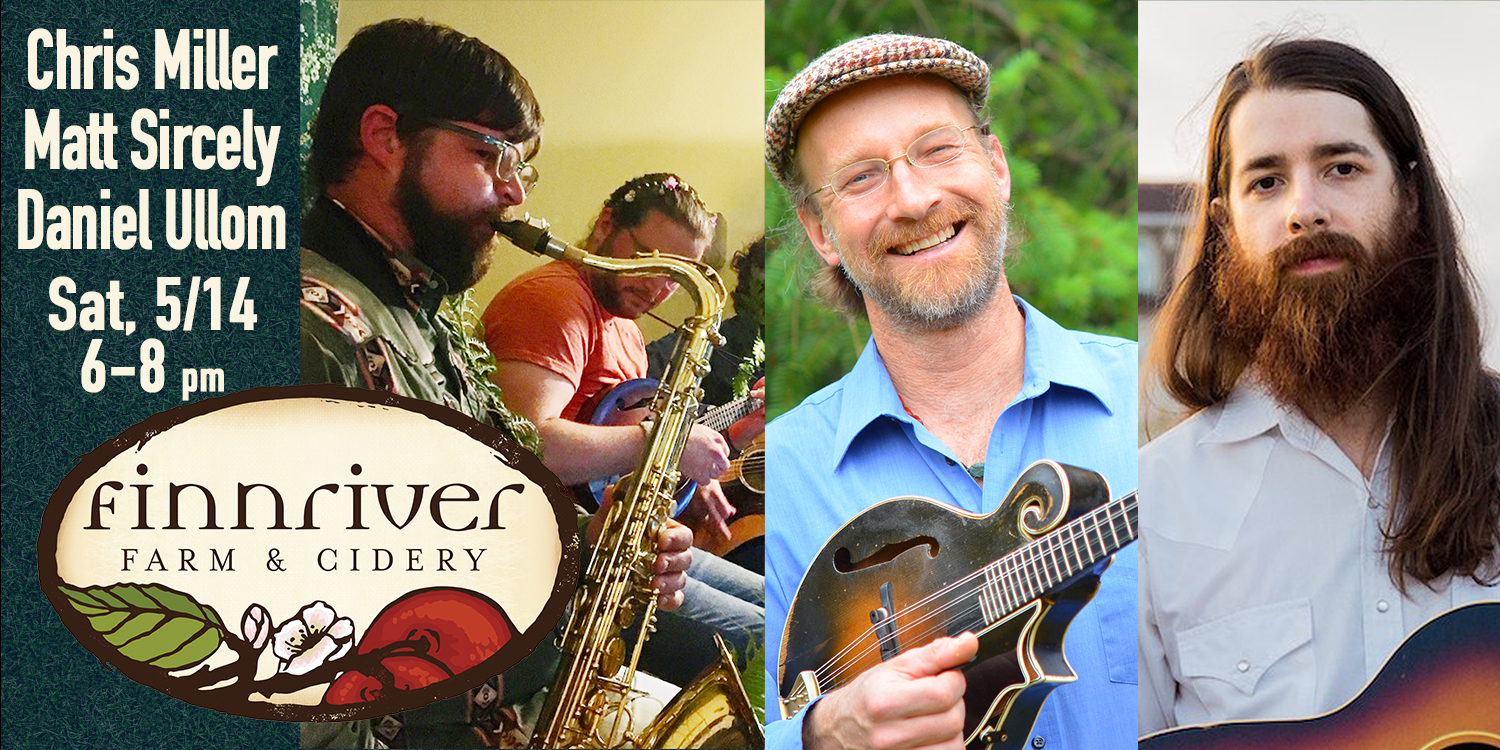 A debut trio performance from Chris Miller on saxophone and banjo, alongside both Matt Sircely and Daniel Ullom on mandolin, guitar and fiddle.

For years, they have taught, cooked, danced and performed together at Blackpot Camp in South Louisiana, and now all three are living in Washington State. Chris Miller now lives nearby in Jefferson County, and Daniel Ullom has returned to the Puget Sound region after a few years in Asheville, NC. These longtime friends will be joining forces at 6pm on Saturday, May 14 at Finnriver for their first trio performance in recorded history.

Chris Miller plays a smooth and sweet clawhammer banjo, yet in the broader world he’s known as “the glue” in the famed Revelers band from Louisiana. A native of Jacksonville, Florida, Chris has traveled the continent as the Revelers’ saxophonist, his fiery tone and swamp pop sensibilities resonating at major festivals and events in North America and Europe.

Matt Sircely’s performances feature original songs. Known for his work as mandolinist and member of Hot Club Sandwich, a Django-inspired ensemble based in Seattle, Sircely composes music in many traditions including folk, swing and blues, drawing upon a breadth of influences to build his catalog of original material. Sircely’s musical tapestries often tap into the histories behind the songs, and No Depression described one of his more contemporary songs as “timeless”.

Originally from the dry foothills and apple orchards of Yakima, some of Daniel Ullom’s earliest memories are of playing back-up mandolin for his dad during family singing sessions. Soon, he was joining bands and playing mandolin, guitar, bass, and fiddle around Eastern Washington, diving just as deeply into the folklore behind the music. After moving to Seattle to attend UW, Ullom blossomed in the vibrant regional scene, he soon began touring regionally and nationally with folk and bluegrass ensembles. Ullom co-founded the Rain City Ramblers, a band still celebrated in the bluegrass community.

Last year, Miller and Sircely appeared at Finnriver in a trio with famed songwriter McKain Lakey, and they presented their debut duo performance earlier this year. A few years ago, Daniel Ullom often played at Finnriver with the Rain City Ramblers, a few years before as a member of the Blackberry Bushes. Ullom has now returned to Washington State after spending a few years in the Southeast. Everybody’s excited that Daniel Ullom is once again on the West Coast.

There is a $5 cover at the door starting 30 minutes before music starts.

Jefferson County has lifted the public health order that requires proof of vaccine for restaurants as well as the indoor masking mandate. Finnriver is following these guidelines and will no longer be checking vaccine status at the door or requiring masking for patrons. Read more HERE.